Bicycles are a 100+ year old technology. We know that automobile and aviation engineers first tinkered on the bicycle to gain inspiration, or to use it as a stepping stones to a greater technology. Several challenges in bicycle design led to the invention of new technology that were directly transferable to other fields requiring similar solutions. The bicycle has given us the pneumatic tires, roller bearings, crank and linkage mechanisms, chain drives, advancements in metallurgy and construction and much more.

Maybe we shouldn't think that bicycle design has reached a design ceiling. There should still be a good bit of room to explore new solutions to needs and this is where brainstorming comes in. I once wrote a post about "Ideas for New Cycling Products" in 2 parts (see Part 1 and Part 2) and threw out there a dish of new and wild ideas. As long as the ground is fertile for new ideas, there is potential for a market.

One aspect of the psychological inertia to change is perhaps due to the thinking that since the bicycle is an old technology, there is no further need to re-visit old ideas. This is based on the assumption that old ideas never made it because they didn't work out or didn't sell. Take a bet. How wrong could you be?

Looking into the history books and studying the field to understand why some ideas did not work out is a fact driven approach. Just because airplanes are far and wide in today's world doesn't mean the hot air balloon did not evolve. In fact, the oldest human carrying solution, the balloon is still evolving. Hot air balloon engineers continue to develop safer burners with higher thermal capacities, lighter and stronger fabrics, new forms of construction, new deflation schemes and so on. Hey it might be slow, but the hot air balloon field is nothing but dead.

And ideas are wanting. There are still needs. Let me give you an example. Even today I'm irritated by the fact that a $5000 carbon fiber bicycle sporting the latest in technology does not have as much as a re-tractable stand so it doesn't fall over when you're not riding it. This has led to people leaning their bikes against walls or sitting on their top tubes and what not. What happens then? You get your top tube dirty. You numb your nether regions (!). Or you scrape paint off the frame. Or you may even tear a hole in the handlebar tape. 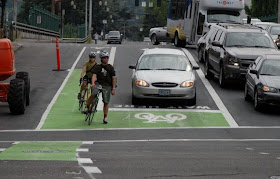 Let's try to brainstorm a solution for a similar idea : A steady-when-stationary bicycle so that when you approach a traffic light during your ride, you don't have to unclip your feet off the pedals. Imagine the small bit of energy saved and the huge convenience you'd generate for a rider especially in heavy traffic situations  I can see a lot of potential for answers to this issue that is unique to specific segments of the market, such as city commuters.

Get together a group of people into a room, close the door and lead a meeting. Don't limit the people to just subject matter experts, because that's where psychological inertia comes from. Get a handful of people from other fields in and some novices too. Deviant ideas are what's in need.

Provide people the problem statement, 40 minutes to bounce ideas around and encourage anything and everything, as wild as they might be. The prime objective is to control the meeting but let people go on tangents to new directions on the design plane.

As an example, a brainstorming meeting may generate ideas for a "Steady when stationary" bicycle as follows :

A. A collapsible support is needed.
B. A gyroscope would provide the required steadiness.
A. A collapsible wheel?
C. The gyroscope can be constructed in two planes - horizontal and vertical.
D. A gyroscope driven by a chain and treadle.
C. Then a special coupling will be required.
F. It is possible to locate the gyroscope in a parallel plane, next to the wheel.
G. The gyroscope can be driven by an air turbine. An air compressor will be driven by the cyclist's feet.
E. A small roller can drive the gyroscope by friction from the wheel.
H. Then the system has to be arranged so that before braking the roller is pressed against the wheel, and when the riding speed decreases, it is freed.
B. Such a gyroscope can return its kinetic energy to the bicycle.
F. Such a gyroscope will, in general, smooth the running of the cycle.
H. It will promote steadiness during low-speed riding in traffic jams.
I. Two automatically controlled jets may keep the bicycle steady.
A. Instead of collapsible supports of auxiliary wheels, the whole frame can be lowered to the road.
F. An automatic device can press the roller to the wheel during acceleration and release it during deceleration.
C. I propose an air balloon to suspend the bicycle during its stops.
I. Or a propeller, like a helicopter, for balancing.
G. A horizontal gyroscope seems to be better; it will resist the bicycle turns to a lesser degree.
J. One merely needs a handle to switch the drive from the wheel to the gyro. Turning the pedals on the spot on will keep the balance.
C. A vertical gyroscope will not disturb the rider essentially, just as the wheels do not. It will help to incline the machine.
G. An electrically driven gyroscope. A bicycle provided by accumulators.

You can see how chaotic but interesting the idea generation session has been. The multiplicity of people and their brains have been employed, usually better than a lone inventor doing the same in a corner of a room, as he is characterized by his own experiences and neural limitations.

After this session is concluded, the next plane in the design exercise can be initiated, that of exploring the rough feasibility of the suggestions. The way you go about that depends on your approach. Don't fail to look into Six Sigma, which has a bunch of neat tools that can be used in a team setting. They might be more time consuming to apply but a rational, systematic approach is required whatever you do. Good luck!